In Antichrist 2016-2019 I promoted a theory based on a timeline of prophetic events centered on June 3 and June 6, 2016.  If my theory had panned out 100%, we would have seen a major Islamic leader suffer an apparently fatal head wound on June 3, and a miraculous resurrection on June 6.  Clues from Bible prophecy, history, even the pyramids and even astronomical alignments all came together to point to this moment – and no miraculous assassination occurred.  Was it an EPIC FAIL, or a disappointingly subtle fulfillment so only the “wise virgins” who are watching will be ready?

I still lean towards epic failure for my timeline – as nothing miraculous and obvious occurred on my schedule.  But there are a few noteworthy events that did get my attention this summer, and given my interest in this time frame I can’t ignore the events or the idea that Bible prophecy will still be fulfilled soon.

When we think of the greatest Islamic leaders, few obvious names come to mind.  Perhaps Mohammad, Suleiman the Magnificent, and more recently Osama bin Laden.  Maybe, if he is truly Muslim “in secret” we could consider Barack Obama an Islamic world leader as well…

On June 3, 2016 – the most famous Mohammad in over a thousand years, boxing legend Muhammad Ali, died after a long battle with Parkinson’s disease deteriorating his brain.  I am not suggesting that the 74 year old boxer was resurrected on June 6 – but was anything central to Islam resurrected?  I say yes – plans for Muslim control of Jerusalem, and for a revived Caliphate to rule from Constantinople…

June 6, 2016 – in addition to fitting the prophetic timeline, is exactly one 49 year jubilee after the Israeli reunification of the city of Jerusalem on June 6-7, 1967 – which is why Israelis celebrate June 6 as Jerusalem Day.  Muslims celebrate the day as well this year, because is is the first day of Ramadan.  It may not seem obviously related at first, but one prophetic web site noted: “Seems Divine retribution struck Paris and Europe as the Revived Roman Empire of Europe concluded a Middle-East peace conference of international powers without Israel. As the world powers led by Europe conducted the conference in Paris, Paris was struck as the Seine River rose 20 feet overnight and flooded the City.”  On June 3, many world powers (Israel excluded) met in Paris to begin talks deciding the fate of Jerusalem.

Europe, America, and the United Nations have resolved to forcibly divide Israel by the end of 2016 – and to deny Jewish historical and religious claims to the Temple Mount in Jerusalem, and give the site of Solomon’s Temple completely to Palestinian Muslims.

Israeli Prime Minister Benjamin Netanyahu spoke on Jerusalem Day about unifying the city and never losing Israeli sovereignty over it again, saying that it historically and currently and perpetually belongs to the Jewish people and that its fate is not to be decided “by international diktats” – clearly referring to the ongoing Paris talks from which Israel has been excluded as if it has no rights in the matter – very reminiscent of the 1938 “Munich Agreement” with Hitler, when Czechoslovakia was not represented at the talks that officially dismembered it.

Since the Paris talks are secretive, I can’t know for certain if June 6 was the crucial day on which it was decided by Europe and the United Nations to forcibly take parts of Jerusalem and Israel for an independent Palestinian nation, an act which has allegedly decided to take the Temple Mount and hand it completely over to the followers of Mohammad.

Another secretive series of events in June would be the planning for Erdogan’s fake coup in Turkey in July.  No leaders were ever taken hostage, but at least 50,000 Turkish leaders in opposition to Erdogan were immediately purged from government, judiciary, military, press, and university positions just after the “coup.”

Walid Shoebat brings up some excellent points in his articles portraying Erdogan as the most likely Antichrist candidate.  John wrote in Revelation 13:4 “Who is like the beast, and who is able to wage war with him?”  Muslim headlines like this one from the Tunisian Telegraph ask: “Who can make war with Sultan Recep Tayyip Erdogan? He became the Muslim world’s defender fighting in the name of Islam and the Koran and Sharia.”

Daniel 11:21 tells us “a despicable person will arise, on whom the honor of kingship has not been conferred, but he will come in a time of tranquility and seize the kingdom by intrigue.”  Through deception and trickery (a fake coup and a calculated great purge of enemies?) the Antichrist manipulates people until he leads a great empire.  Watch Turkey supercede ISIS and claim the Caliphate (leadership of the Islamic world) under Erdogan soon.

The coup took place in July, and no doubt crucial planning for it occurred in June.  Was June 6 pivotal?  We may never know.

What we do know is that Erdogan is now dictator over a powerful Islamic nation, the site of the former Caliphate, with an intense desire to rule the next Caliphate. In 1996, Erdogan said: “Democracy is like a streetcar.  You ride it until you reach your destination, then you get off.”  In 2016, Erdogan has reached his destination: dictatorship.

Posters for a movie celebrating the Islamic conquest of Constantinople in 1453 had already been plastered across the Turkish nation with the slogan: “Yeniden Dirilis, Yeniden Yukselis” which means “Resurrection, Rising Again.”  Is it Erdogan rising from a symbolic head wound – the alleged coup?  Is it an Islamic Caliphate rising again, a resurrection from the dismemberment of the Ottoman Empire after WWI?  Is it a clue to “wise virgins” that the Antichrist is rising?  If it isn’t evil, why all the creepy images in the posters? 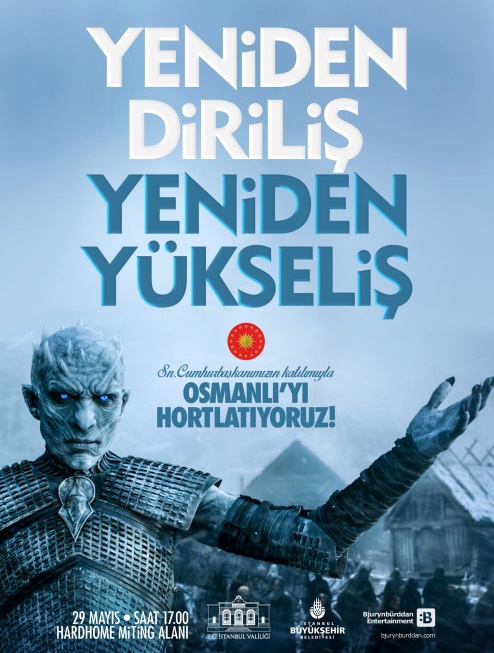 What is being resurrected in this poster?  I am reminded of a verse in the Qu’ran, Surah 8:30 – “Allah is the greatest of all deceivers.”

I don’t think that a bunch of coincidences pointing to June 6, 2016 ended up proving anything about the arrival of the Antichrist.  What has happened is less dramatic and much more symbolic than the fulfilments I had expected.  But events have gotten my attention, and even if the economic collapse I have been predicting for 2016 fails, and even if America really does have an election in November and not martial law and dictatorship, end times Bible prophecy is being fulfilled in Turkey (and Syria) in 2016.  Pay attention, and get your house in order both materially (for hard times) and spiritually (for end times.)  If my book or my blog helps anyone WAKE UP to pay more attention to the correlation between Bible prophecy and news headlines – hallelujah!

Historian, investigator, and author of prophecy books like End Times and 2019, and Antichrist 2016-2019
View all posts by David Montaigne »
« Retired Green Beret Warns: “World Governments Are Preparing For Disaster And War”
Why it’s Quiet on the Eastern Front »

One thought on “Antichrist Rising and June 2016 – Failed Prediction, or Subtle Fulfillment Pointing to More?”